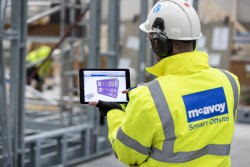 A recent report issued by the Construction Industry Training Board (CITB) and Experian that covers the period 2021-2025 highlighted the need for an extra 217,000 workers in the construction sector. This equates to 43,000 workers per year over the next five years.

Furthermore, in his 2016 Review of the UK Construction Labour model, Mark Farmer identified the real ticking time bomb as being that of the industry’s workforce, size and demographic. It was noted at the time that, based purely on the existing workforce age and current levels of new entrant attraction, there could be a 20-25% decline in the available labour force within a decade. .

Additionally, referring to the 2015 Arcadis paper ‘People and Money’, Mark Farmer highlighted the need to recruit 700,000 people in the construction sector to replace both those retiring and those lost through natural leakage to other industries. It is clear then that the demand for extra workers will not be met through new industry entrants. Hence, it should be considered – how do we attract more people to the industry to address this deficit? I would argue that offsite manufacturing (OSM) can be part of the solution. .

OSM also offers a much more attractive work environment than the traditional construction setting, where all works are carried out on-site and factors such as weather conditions make it considerably more difficult to deliver projects with time and cost certainty. Shift patterns can also be introduced much more easily in a factory environment, which can allow flexible response to demand. A manufacturing-led approach leads to a less itinerant workforce too, as the focus is on one location. Breaking down the manufacturing process into component parts also alleviates need for wide skillsets and training can be given more easily to upskill the labour force. All this means that OSM is much less exposed to high labour costs, particularly in periods of high demand. .

With its appeal to a wider spectrum of workforce, OSM has a huge opportunity to develop and reduce the overall demand and reliance on a decreasing trade-based skills pool. Workers can be trained to the appropriate skill level needed, providing a much greater pool to recruit from. OSM is also better placed to invest in apprenticeships via structured training schemes. Apprentices will be employed at the same location throughout their apprenticeship, which provides a stable learning platform for new recruits. With a consistent flow of work through the factory, offsite can and will play a major part in addressing current and future skills shortages. .