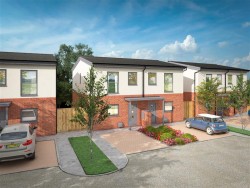 BRITAIN is witnessing a modular construction revolution driven by demand from local authorities and housing associations,  according to a leading Yorkshire architect.

Graham Edward, Managing Director of Leeds-based Edward Architecture, who has more than 30 years' experience in the sector, believes the use of modular buildings could help the country meet the soaring demand for affordable homes.

He said: "Earlier this year, it was predicted by one of the large real estate firms that the proportion of new homes built using MMC – Modern Methods of Construction – would increase from 6 to 10 per cent to 20 per cent of the market share in the coming years.

"There is an argument that, with how the market is shifting, businesses operating in construction need to be working more efficiently and more digitally."

Under the modular method, a building is constructed off-site. It is designed and built to the same standards as its conventionally-built counterparts but in about half the time. Buildings are produced in "modules" that are put together on site.

Mr Edward says off-site MMC provides more accountability and cost control for a project. He added: "Our inquiry level and order book for MMC indicates that the market will further accelerate in 2022.

"The Government's enthusiasm is accelerating this modular market growth. We are finding that local authorities and housing associations represent the core of the modular client market.

This has been generated by government grant funding aimed at promoting modular construction. There is definitely a modular revolution amongst local authority and housing associations."

Offsite construction is also an effective way to expand capacity in terms of workforce and materials, Mr Edward added.

He added: "Modular housing can be part of the solution to the UK's affordable housing crisis."

The advantages of such housing include the speed and efficiency with which it can be erected, Mr Edward said. He added: "Modular construction has several sustainability benefits. Streamlined design and efficient production reduces waste to landfill.

"Modular housing companies are rising to the challenge where external designs on standard modules can be exciting, fun and a great place to live. An example of this is our scheme for Bromley Council in Chislehurst which is designed specifically to look as 'unmodular' as possible.

"To do this we have made changes in materials and height and used local materials to create something that is fresh, modern and sits with the local character of the area."

Danny Belton, head of lender relationships at Legal & General Mortgage Club, recently warned that the housing market has been put under considerable strain in recent months, with material and labour shortages slowing the development of new homes.

He added: "If home ownership is going to remain possible for future generations, then alternative construction methods, like modular housing, need to be considered."

Mr Edward predicted that modular would struggle to become more economical until there is a better understanding of the 'whole life' cost and also further encouragement by the Government.

He added: "The luxury housing market can be part of the modular growth. Modular companies that adapt to bespoke designs will be in the best position for this market.

"Whilst module sizes are limited due to transportation restrictions it is possible to design large rooms which use two, three or four modules to create exciting spaces to suit the luxury market."