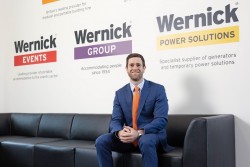 From Yard Operative to Chief Executive, Jonathan has worked his way through many roles within the Wernick Group. Initially joining as a Yard Operative at the Wickford Hire depot for the summer of 2006 before moving on to do seasonal work with Wernick Events between 2009 and 2011.

Continuing his path through Wernick Hire, Jonathan was promoted to the position of Deputy Managing Director in January 2017 assuming responsibility for all three southern regions which comprised of a total of 12 depots. At the same time, he also joined the Wernick Group Executive Team as Group Marketing Director.

Jonathan believes that it is the people that make his job enjoyable: "We have the privilege of employing the best people in our sector who bring with them an abundance of skills, experience, and more importantly, personality to make every day a pleasure."

Jonathan's latest promotion came about following the announcement from the former Chief Executive of the Wernick Group, Simon Doran, who stated that he would be retiring from the company in 2021. As a result, Jonathan stepped into his new role as Chief Executive from the 1st July 2021 following Simon's departure on the 30th June.

When questioned on his feelings about becoming Chief Executive Jonathan commented: "It's exciting to be the 4th generation of the family to be leading the company and I look forward to the challenge of continuing its success."

Speaking on his retirement, former Chief Executive, Simon Doran, commented: "I'm delighted that Jonathan will be taking over from me as Chief Executive and I wish him every success in the new role"