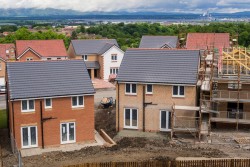 The Welsh government has promised to inject £30m into housing schemes, including £10m for factories to build modular homes, as part of wider funding for key projects.

The money will come via a round of funding from the Wales Infrastructure Investment Plan (WIIP), which also includes £53m to support businesses in the face of Brexit and £77m of investment for future developments, including housing.

First minister Mark Drakeford said: "Today's funding sends out a clear message that as the chaos in Westminster continues, the Welsh Government continues to deliver our flagship commitments to protect the interests of Wales and grow our economy."

His government has pledged to deliver 20,000 affordable homes, introduce a Rent to Own scheme and support innovative housing schemes. It has promised to invest £1.7bn over the current assembly term, which runs to 2020, including £528m through the Social Housing Grant programme, which is available to social landlords.

It was not clear exactly what the £30m made available this week would be spent on, but the government has previously backed mixed-use schemes, enabling initial works to be carried out or forward-funding development projects.

It also favours innovative methods of construction, include modular development and offsite building.
The funding boost was announced alongside the publication of the WIIP pipeline, which sets out plans for more than £33bn of planned infrastructure investment across a broad range of public and private sector projects due to start in the next three years.