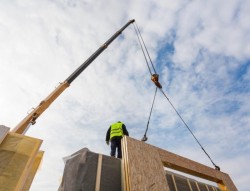 So far, we have focused very much on emissions released during the operational life. However, the concept of "embodied carbon" has always existed, invisible previously, but is gaining momentum.

A couple of years ago the World Green Building Council (GBC) brought out an interesting report "Bringing embodied carbon upfront". It lifted that invisibility cloak and asked us not to ignore the emissions released by the manufacturing, transportation, construction and end of life phases of buildings. These emissions are known as "embodied carbon", and according to the World GBC contribute to 11% of all global carbon emissions.

A key source of embodied carbon the report identifies are construction elements and materials. Due to their carbon intensive load bearing, structural materials such as concrete and steel and building elements, such as foundations, frames and other forms of superstructure represent the biggest contribution to embodied carbon. This therefore requires further attention.

That attention may be lacking in certain areas, for example, there has been some criticism that the UK Government's Heat and Building Strategy includes details on reducing operational carbon but lacks focus on embodied carbon. That said, it is gaining momentum in other areas and here are some solutions.

It was recently reported in the Economist that if the cement industry were a country it would be the third largest emitter in the world, after China and America. This is mind-boggling to consider. However, there are solutions such as the innovations and testing currently underway to produce green cement as the report goes on to say. For a great example, see Heidelberg's carbon capture and storage project.

Cross-laminated, engineered timber (a sub-set within MMC) is both a sustainable source and is now being used more and more in construction, including in high rises. As well as reducing the energy used during the construction process MMC can considerably improve the energy efficiency of buildings once they have been built. Precise MMC factory processes also allow for more effective waste management, as well as enable materials to be ordered and specified with better accuracy. This means that embracing MMC can reduce energy bills and building costs whilst at the same time driving UK forwards in the race to achieving net zero.

Tristan's clause can help with incentivising industry participants to reduce GHG emissions through use of more sustainable materials: https://chancerylaneproject.org/climate-clauses/construction-materials-green-procurement/

Luna's clause incentivises building contractors to propose "Net Zero Modifications" to project works which will benefit clients and their projects, and the environment: https://chancerylaneproject.org/climate-clauses/green-construction-modifications/ or

Mary's clause prioritises energy efficiency in the design and build of a construction project and minimises energy use and waste https://chancerylaneproject.org/climate-clauses/build-contract-energy-efficiency-clauses/

This article is named "Violet's clause" after TCLP's approach, i.e. naming its clauses after children. Violet is of course a fictional character from "The Incredibles" but she puts a positive spin on invisibility and how-to problem solve. So embodied carbon may be invisible to us, but we can most certainly identify it and find ways to tackle it much better.