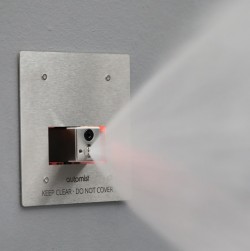 Attendees at this year’s Offsite Expo will be able to see Automist, Plumis’ award-winning fire suppression system in action. The Plumis demo van will be located just outside the venue on the north forecourt, or you can chat to the team on stand F10 or in the buyers and specifiers forum, Offiste Connect.

For factory-built homes, Automist offers a number of benefits over traditional suppression systems. As a pre-engineered, modular system, more of the installation work can be completed in the factory, reducing costs and the need for specialist contractors.

On site connection and commissioning are easy too, as Automist is a dry pipe system using flexible hoses, so joins between modules can be installed seamlessly.

Why we decided to rethink the sprinkler

Fire sprinklers have remained fundamentally unchanged since they were invented in the 19th Century. We developed Automist because we believed they could be better: operate faster, be more reliable and cause much less damage when they activate.

Automist has been shown to operate up to two minutes before a traditional sprinkler for some fires - minimising the build-up of toxic smoke and tackling fires before they can grow. You can see Automist in action here.

Early activation and the unique properties of wateriest, help to maintain survivable conditions, reducing the build-up of toxic gas and smoke, the biggest killers in domestic fires, and giving occupants valuable extra time to escape or be rescued.

Trusted in more than 10,000 properties

Automist is already trusted in more than 10,000 properties, from individual homes to large social and sheltered housing schemes.

Independently tested to confirm it meets the fire performance requirements of BS 8458, Automist is LABC Assured and is suitable for use as an alternative to sprinklers in a range of domestic and residential applications. It can be used to meet building regulations and as an elective upgrade to improve fire protection.

If you would like your homes to include industry-leading intelligent fire suppression, designed to detect fire earlier and activate faster, we’d be delighted to discuss options and to show you Automist in action at Offsite Expo.