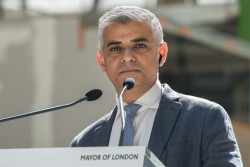 Mayor of London Sadiq Khan has floated an array of housing pledges in his bid to secure a second term at City Hall in next month's mayoral election.

Khan said he would put a "relentless focus" on building more council housing and other genuinely affordable homes if he secures victory in the 6 May poll.

Khan wants to build 10,000 new council homes in the capital

His just-published manifesto targets the delivery of 10,000 new council homes in the capital and a gives a commitment to "explore the creation" of a fund to support councils to re-purchase housing stock sold off under the Right to Buy scheme since the 1980s.

Khan said he would build more "genuinely affordable" homes on public land and "maximise the number" of homes built on land owned by the Greater London Authority.

He said that if he secured a further term as mayor he would also give his housing and land directorate "first refusal" on land owned by Transport for London that was suitable for housing development, above and beyond the transport authority's current development programme.

Khan said the move was part of a plan to transfer more TfL land to the GLA to "prioritise the building of genuinely affordable homes while delivering a fair return to TfL".

Khan also pledged to commission an independent review to "streamline housing development across the wider GLA group" and pilot a new "City Hall developer" to start directly building low-cost homes in the capital.

His manifesto also commits to exploring ways to support the expansion of offsite construction in the capital to deliver more modular housing, with the potential for City Hall to back a new MMC factory or logistics hub.

Khan said he would campaign for billions of pounds in additional central-government funding to support the construction of new homes.

"I have ripped up my Tory predecessor's planning rules, which failed to deliver the kind of new homes the city needs," Khan said, referring to former mayor Boris Johnson – now prime minister.

"My new London Plan, which Tory ministers tried to block at every turn, has a strategic target for 50% of all new homes to be genuinely affordable.

Khan said he would continue lobbying for a ban on the use of combustible materials on all buildings, following 2017's Grenfell Tower fire, as well as for the fitting of sprinklers and other fire-suppression systems in all blocks of flats.

However the mayor stated he was not opposed to high-rise development and would back proposals for taller residential and commercial buildings if their design was good enough.

"High quality design standards will continue to be at the heart of planning and development, with the work of my mayor's design advocates remaining crucial," he said.

"I'll support tall buildings where they are safe, appropriately located and designed to a high quality with tough safety and environmental standards, but I won't shy away from opposing those that don't enhance London's skyline, or which provide little social or economic benefit."

Khan's manifesto also proposes the creation of a centre to accelerate "innovative and deep approaches" to retrofit existing homes to meet the goal of making London carbon neutral by 2030.

"I'll lobby the government for the funds London needs to retrofit millions of homes, ensuring a targeted approach for those residents who need warm, healthy houses the most," he said.

Conservative mayoral candidate Shaun Bailey has pledged to build 100,000 affordable homes for Londoners and to sell them for £100,000 each under a shared-ownership model that would require a deposit of just £5,000 from first-time buyers.