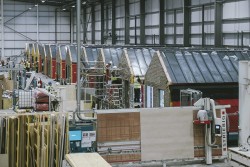 Laing O'Rourke, Ilke Homes, Urban Splash, TopHat and Legal & General Modular have formed Make Modular to further the ambitions of the modular sector. The new trade body states that the UK housing market could "transform into the most advanced housing manufacturing market in the world in under a decade" by delivering up to 75,000 new homes via modern methods of construction.

Dave Sheridan, executive chairman of Ilke Homes and chair of Make Modular, said: "Modular housing has grown rapidly in the last few years. The establishment of our own trade body is the crucial next step in this process.

"As a natural partner to government to solve the housing crisis, deliver the levelling up agenda, and combat climate change Make Modular will accelerate and advance the MMC agenda through one strong voice rather than a series of disparate ones."

Make Modular claims that its members' factories can produce a new home every two hours, which each unit being "near defect free" and having 97 per cent less embodied carbon than traditional builds. The five firms have invested a combined £500m in modular facilities and software.

The new trade body has argued its approach to housebuilding could help the country build more houses in the face of a looming labour crisis.

It said: "There is a major risk that by the next election construction has become the new haulage, with economic competitiveness undermined by an ageing workforce leaving the industry."

The members also want to bring 50,000 new, younger workers into the industry. In the past three years they have created around 2,000 jobs.

"But to make real significant progress, modular housing needs to have equal access to land for construction with many sites still favouring traditional modes of construction. Modular also needs to have the weight of government procurement behind it, using a joined-up approach including education, defence and housing to build much needed scale the UK's modular industry."

In November it was revealed that L&G had invested a further £6m into its modular business, citing the investment as underpinning the "next growth phase" for the business. In September Japanese modular firm Sekisui pumped £18.5m into its UK operation Sekisui House UK, which was founded in 2018.