Offsite: The building built by Ghurkas 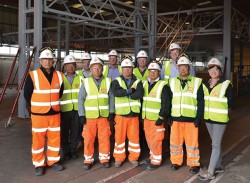 In an industry with flatlining productivity and endemic skills shortages, there’s a rallying cry to develop technologies that move away from labour-intensive brick-on-brick and put us in sync with the forward-thinking innovators of this world - think car-making, aerospace and oil and gas.

If, the argument goes, we could re-engineer buildings from first principles, move away from reliance on highly skilled but over-specialised trades, produce defect-free buildings as reliably and predictably as cars off a production line…

In fact, a pilot project on an industrial park near Strood, Kent has already demonstrated exactly this approach, with all the positive results the pundits predict. Pharmaceuticals multinational GSK’s “Factory in a Box” is an Ikea-style, click-and-connect production facility, built by a team of just eight ex-Gurkhas with no particular construction training.

It literally arrives on site in boxes – shipping containers that contain every component packed in the reverse order needed for the re-assembly process. It’s a building packaged as a repeatable commodity.

The project responded primarily to GSK’s need to develop factories and packaging facilities in emerging markets, particularly in Africa and Asia. “Our challenge is to how can you build a kit factory that anyone can build,” says John Dyson, head of capital strategy and design at GSK. “The more you rely on trades, the more you rely on the quality in the country you’re building in, and that costs money.

And in particular it’s difficult for a company with very high compliance standards. So it started with the hypothesis: if we can fit everything into a shipping container, we can send it anywhere in the world, to be built by anyone.”

“My ambition is to repeat this multiple times, and to put components into projects in the UK to help achieve cost certainty. I hope that Factory in a Box will be one of the generic systems that go towards revolutionising the construction process in the industry. It’s a reasonably small step from this to the health, education or residential sectors,” he says.

The project was developed by innovative design and management consultant Bryden Wood, a firm that has moved away from its architectural roots to call itself “the R&D office of the building industry”, bringing expertise in rethinking business processes and throwing out old  assumptions. The firm has a track record in re-engineering buildings and Design for Manufacture solutions, cutting costs and project programmes for clients such as the Metropolitan Police, Gatwick Airport, Circle healthcare and the Ministry of Justice.

Over the 10 years of their professional partnership, Bryden Wood and GSK have championed process-driven solutions, rather than a design-led approach. Bryden Wood director Jaimie Johnston explains: “You could call us McKinsey with overalls – we’ve looked at GSK’s needs; we can run a design model to quantify the optimum size of a facility to reduce bottlenecks. In one instance, we found if you change the shift patterns you can make 25% more product. The answer isn’t always a building – we’re trying to put more science into the decision-making.”

In this case, the problem was: how does a firm like GSK go into an emerging market and quickly build high-quality facilities with different levels of capability in different countries? Bryden Wood’s approach was to standardise and commodify the design and construction process by breaking the problem down into “chips”, or groups of related components, that Johnston calls “the Lego bricks of the building process”.

Connect the chips in a workable order and you have a schematic for a functioning production facility. The system means that a GSK team can draw up a reliable cost estimate of a bespoke new facility within a matter of days – and then modify its capacity or layout equally quickly.

The chips are based on standard GSK functions across its property portfolio, such as storage areas, clean rooms, blending chemicals or packaging. “We break it down to what makes sense in terms of our processes, then we build a database about each chip defining its physical characteristics, its energy requirements, air change requirements, how many operatives it will need and the training they will require,” says Dyson.

The chips are both physical and digital entities containing all the related BIM object data, so that the actual building will be an exact representation of the digital model, with its components assembled in the same sequence.

Cataloguing repeatable components and systems in this way also means that components can be tagged with 2D bar codes and tracked through manufacturing distribution and on to site. “So we know how long it takes to manufacture them, load them and put them on to the frame – giving very, very accurate data on the cost and the labour requirement,” says Dyson.

But in future overseas roll-outs, UK suppliers could be replaced with local firms, adds Johnston. “With shipping relatively cheap, it doesn’t add much extra on top of the manufacturing cost. But in some markets – for instance, India – there’s a developed supply chain and we might have been able to manufacture the components there.”

His colleague, associate architect Jim Mitchell, adds: “We could get the components sourced in advance to suit where we’re going. In Asia, China is now less cost effective, but it might be Vietnam, if they can produce steelwork to our specifications."

But a key project partner for Factory in a Box was management services company FSI, which supplied a workforce of ex-Gurkhas, chosen for their work ethic and reputation for teamwork. The team of just eight multi-skilled members did have some electrical, plumbing and decorating experience, but each team member also turned their hand to any tasks required. The only add-on training was instruction in crimping pipework to join copper pipes.

The ex-Gurkhas’ task was to assemble pre-engineered components with simple, bolted connections. These were loaded in the shipping containers in a pre-arranged sequence so that the first items to come out were the first in line to be assembled. On site, the operatives followed a detailed method statement for each section of the build, but were also guided by an easy-to-follow system of coloured dots – fixing pink brackets to pink steels, or yellow to yellow.

Wall and ceiling panels connect to a structural steel frame that is pre-engineered to include wiring and plumbing routes.

“The site is massively productive,” adds GSK’s Dyson. In fact, GSK has calculated that 82% of the workers’ time on site was spent productively. While there is little recent research on measuring site productivity, a study quoted in Sir John Egan's Rethinking Construction report suggested 60% was a typical figure. The Factory in a Box also chalked up zero incidents, and zero defects.

To avoid working at height, Bryden Wood developed an innovative idea for a roof pivot, with the steel roof arriving on site folded flat then lifted into place and made rigid with a special hinge detail at the apex. But in the event, the system will be modified as it created a seal that wasn’t good enough for GSK’s compliance standards, with a gap failing the standard for moisture and insect penetration.

The assembly process also forced another modification, related to the riskiest part of the build – lifting the 25 tonne ceiling assembly from the ground in stages via a system of ratchets on the structural columns. Two methods of lifting were trialled but in the end a simple mechanical block-and-tackle system was pr  eferred over using hydraulic jacks attached to battery packs.

The finished product is estimated to cost 10% more [corrected online] than a standard local building, but built to world-class quality and safety standards – and far quicker. “We’ve taken a sophisticated building and turned it into a step-by-step process, assembled with the type of efficiencies you’d find in a factory environment,” says Bryden Wood’s Mitchell.

GSK’s Dyson is certain that the contents of Factory in a Box will be as valuable for the wider construction industry as for GSK’s own agenda. “It’s disappointing to me that so many industries have stepped up a gear in terms of productivity, such as the car industry or aerospace, when some measures of productivity show construction is actually getting worse, not better.

“I’m hoping we can get the message out to the industry that there can be a different way of doing things. There’s no IP in this – I’d like people to go 'that’s a great idea, let’s do it’.”