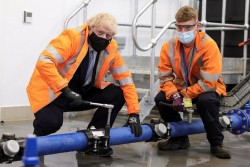 When Boris Johnson pledged to ‘build, build, build’ to drive Britain’s recovery from the economic shock of the COVID crisis, Gary Parker, Managing Director of modular specialists Integra Buildings, had little doubt that the offsite sector would be leading the way.

As the Prime Minister set out his vision last summer, we were already witnessing sky-high demand from within the public sector, including hospitals wanting to rapidly increase capacity to cope with the pandemic and growing schools in urgent need of upgrades. What he did not expect was for the Prime Minister to check up progress personally.

He visited two of the projects we’ve worked on over the past year, which I think goes to show how important modular is to deliver on the Government’s infrastructure plans. The first of the PM’s visits was to Hereford County Hospital, where we are working for client MTX Contracts, and installed modular elements for a state-of-the-art, 72-bed extension, as part of the Government’s ‘Project Speed’ initiative, which is injecting £3billion into NHS facilities. The second development, a major training academy for Severn Trent Water, is benefiting 500 trainees from the Government’s Kickstart scheme for young people at risk of long-term unemployment.

The success of such high-profile projects is evidence of how the modular building sector has ‘come of age’ over recent years and is now playing a major role in delivering transformative benefits to communities and businesses as they recover from the pandemic. It’s not that long ago that modular buildings were thought of as a cheap, temporary solution. Now, more and more blue-chip companies and public sector organisations are recognising modular as the progressive option.

It’s not just that we can deliver at pace, it’s the exceptional quality of the product – as good as anything traditional construction can offer – with added benefits such as sustainability, flexibility and considerate construction. Indeed, with offsite construction reducing build time by up to 50% and waste by as much as 60&, the Prime Minister’s promise to: “build back better, build back greener and build back faster” seems perfectly designed to promote the modular sector.

It’s a far cry from 1997 when I founded Integra with a handful of colleagues. The business, which can act either as principal contractor or a modular specialist sub-contractor, now has a turnover of nearly £40million and employs more than 120 people.

As a mark of how far the sector has come, look to a project at a secondary school in Stockport, Greater Manchester. The teachers were taking classes in worn-out prefabs from the 1990s – the sort of make-do cabins that modular was once associated with. We knocked them down and installed a state-of-the-art, two-storey teaching block. The materials and cladding systems are so good now that we were able to replicate the look of the school’s traditional brick buildings, which date back 80 years. I’ve no doubt our building will still be performing well 80 years from now.

Government-backed initiatives such as the Crown Commercial Service modular framework, have sent a signal to the private sector that modular is a trusted alternative to traditional construction, but with client expectations soaring, manufacturers will have to continue to innovate in order to compete. The days of producing a standard modular build to a template are over. Everything is bespoke now. You have to break the mould if you want to survive.

Significantly, designers have innovated their way out of the constraints put in place by the need to transport modular bays by road. A prime example is the Severn Trent Academy, which was opened by the PM in May. The building required high ceilings and robust concrete floors, so we designed bespoke roof units featuring extendable frames, allowing the height to be increased in situ. Meanwhile, modular pods were installed without floors, allowing concrete to be poured in the traditional way. We’re increasingly mixing and matching offsite and traditional techniques and pushing the boundaries of what can be achieved with a modular build.

The modular sector is not without its challenges. As orders have boomed, so too has demand for skilled workers, with many manufacturers finding recruitment increasingly difficult. Here, the answer lies in developing homegrown talent. With Brexit and the pandemic, some skilled foreign workers have returned to the continent, but I think we’re also seeing the effects of a historic lack of investment in apprenticeships. I started out as an apprentice and many of our senior people have worked their way up, so we’re keen help the next generation follow in our footsteps.

Integra has invested in high-quality training facilities and teamed up with a local FE college to create a school of excellence. As the UK emerges from the pandemic, I believe the offsite sector is well placed to help meet the challenges faced by society and to build a more sustainable future. The pandemic has highlighted the need for more innovative solutions to the problems we face as a nation. I think modular building will be at the forefront of those efforts.