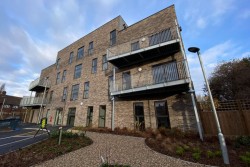 The modular homes were manufactured at Rollalong's factory in Dorset and later installed at Sugden Way in Barking as part of a development managed by Be First for Barking and Dagenham Council.

'Addressing the shortfall in affordable homes'

"We're extremely pleased to have completed this residential scheme which now provides a range of high-quality, affordable homes for people in Barking and Dagenham," said Clive Harris, construction manager at Rollalong.

"Like many parts of the UK, Barking and Dagenham suffers from a shortage of housing, and our modular approach offers local authorities a chance to address this shortfall in around half the time of a traditional build.

Sam Parry, construction manager at Be First, added: "We're really pleased to say that in spite of the coronavirus we've delivered 13 new affordable homes for the council in a fraction of the time a traditional build would take.

"More importantly, the standard is excellent, which means top-quality new homes for local people that will stand the test of time."

The modules were transported to the site and lifted into position and connected together over a five-day period, after which the internal and external finishing process commenced.

Internal finishing times on site were reduced as the modules were 80% complete before they were installed.

Sugden Way is the first of two developments Rollalong is creating in Barking and Dagenham – it will also be delivering a three-storey apartment block featuring six individual apartments at Mellish Close.