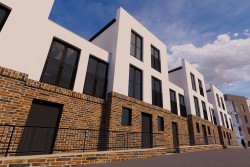 Alex Fink began his career at Lehman Brothers in 2008 and retains a role as Head of Investor Relations at property investment platform British Pearl.

Project Etopia is expanding rapidly and began development of 47 modular homes in Corby, Northamptonshire, in December. The first four houses are almost complete and will be joined by a further 27 houses and 16 apartments. It is Project first major development and will pose as an alternative to bricks and mortar homes among Corby's growing population of young commuters who take advantage of the town's hour and ten minute journey time to London.

The company also entered the self-build market this month (February), launching E-Tribus, which is a partnership between Project Etopia and self-build specialist Tribus Homes.

Alex Fink, Director of Project , said: "Project Etopia is rapidly sending modular house building mainstream. It's an incredibly exciting time for a young company to be in this sector and Joseph has done a tremendous job surrounding himself with people who will deliver his vision."

Joseph Daniels, CEO of Project Etopia, added: "It's great to have Alex on board. We've had tremendous support from the Fink family and Alex's experience of developing businesses means he has the insights to help us drive the Etopia proposition forward."