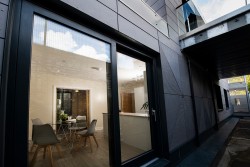 Youth homelessness is a tough problem to solve, but modular housing may help provide the answer, writes Seyi Obakin

The UK's housing crisis shows no signs of abating.

The market has been broken for years, with everything exacerbated by the pandemic-induced economic crisis, and unrealistic expectations for quick new builds without adequate resources place undue strain on already overstretched councils.

The government is certainly using some tools in its arsenal to help, but someone needs to pick up the slack.

We're scaling up our most ambitious housing and development project in our 50-year history, the Independent Living Programme (ILP).

A fifth of the young people who live in our services find themselves ready to move on but unable to do so because of shortages of affordable housing and a benefit level set too low for them to access most of the private rented sector.

Through the ILP, we are delivering 300 homes across London and Greater Manchester for young people in this situation. These homes will be an affordable alternative to the private or social sectors, with rent capped at around one-third of their earnings, giving them the ability to take the next step in their lives and careers without the burden of market-level rents.

By basing ILP on a largely modular building model, homes can be constructed mostly offsite and assembled on location, a process that can be 60% faster and costing around 40% lower than traditional builds.

With lower costs and faster build times, we believe modular living can become an important tool in tackling the housing crisis and a tangible asset for local authorities under pressure to meet difficult targets.

Modular building can also help in the fight against climate change, with 90% reductions in waste compared to traditional building methods. And because of the faster construction times, developers can be more responsive to demand.

Alongside the cost and construction advantages of modular homes is the potential for them to be disassembled and reassembled on multiple sites over time. This possibility opens up a broader range of use options for both public and private undeveloped land to deliver affordable temporary housing, in particular by charities.

To further drive the more efficient use of brownfield and 'meanwhile' sites, the government could consider incentives through the tax and planning systems.

Building modular means that resources can go further, allowing us to help more of those in need, yet modular homes continually get a bad reputation.

Some may remember the 'pre-fabs' of the 1950s and 60s, which were infamous for their poor quality. For others, shipping container homes springs to mind, a popular tactic in recent years to address homelessness that leaves much to be desired in terms of habitability, and unpopular in communities for their appearance.

But technology has moved on, and today it is entirely possible to construct modular buildings that do not compromise quality of living or style, as developers in countries like Germany, Japan and Sweden have been doing at scale for years.

Modular building cannot solve the housing crisis on its own, but it can play a vital part in reducing rents, tackling climate change, and making better use of land.

It is in developers' self-interest to make more use of modular, and in local authorities' interest to champion partnerships with charities like Centrepoint to increase delivery of truly affordable homes for young people.