Modular homes: Coming to a town near you 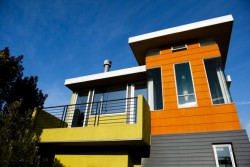 Imaging creating your own home online, buying the modules and then having them delivered to a designated plot to be assembled into your dream house? It might sound futuristic, but it's about to become a reality. Stephen Ward explains

One lasting legacy from the pandemic will be the switch to online purchasing. Even with retailers open again, as a nation we have all become far more comfortable with making purchases online before we have seen the goods.

Now imagine extending that online shopping habit to buying a home – where you choose the layout and the décor from the comfort of your own armchair, for it to be then manufactured and delivered in modules where you want it.

It might sound crazily futuristic, but choosing your own home in this way is all part of a new industrial revolution according to the government.

The approach is called Modern Methods of Construction (MMC), a term that encompasses approaches to housebuilding that are quicker and more efficient, and importantly where many of the components are fabricated offsite.

MMC might be a relatively new phenomenon in the UK, but countries around the globe have been benefitting from it for years. Japan leads the way having first embraced MMC 50 years ago, Tokyo has the capacity to build more houses per year than the entire UK.

Elsewhere, Sweden is building at least 45% of new homes off-site in factories, China has set a target that 30% of all new buildings will be constructed off-site by 2026 and Singapore requires all development on government land to use modular construction.

So, with the UK failing to meet its 300,000 new homes a year target, MMC could be a critical part of solving the UK's growing housing crisis. To that end the government has even appointed an MMC champion, Mark Farmer, who has responsibility for developing the safety, quality and potential of the industry, which will be worth £40 billion a year once mature.

The government is also putting strong financial commitment behind MMC. To date more than £233 million of loans have been agreed for MMC projects by the government's Home Building Fund.

And as part of the March Budget, the Ministry of Housing, Communities and Local Government announced plans to launch an MMC taskforce backed by £10m of seed funding.

The increased focus is understandable. MMC can deliver high-quality housing at pace and according to the government it has been shown that some homes built using MMC have 80% fewer defects and can reduce heating bills by up to 70%. Some of the main benefits of MMC housing include:

Buyers should also not be concerned about quality as modular homes are built to last the same amount of time as a traditional property.

One unlikely advocate of MMC is financial services provider Legal & General (L&G) which has created its own modular homes business and factory in Sherburn, Yorkshire. L&G has assembled a team of people with experience in sectors ranging from housebuilding and land development to aerospace and engineering.

Its latest project in Bristol will create 185 new homes in conjunction with the City's council. Once the land has been cleared and prepared, the homes can be assembled on site within eight weeks.

And in a sign that the UK has started to make its presence felt on the world stage, Croydon become the proud home of the world's tallest modular building this year, just 35 weeks after construction started. The two towers of 101 George Street, developed by Tide and its sister company Vision Modular Systems in its Bedford factory, stand at 44-storeys and 135.6m. It is the tallest modular apartment tower in the world – the same height as the London Eye.

MMC will play a major role in the future of housebuilding. There is no reason to shy away from properties constructed in non-traditional ways and those who set the standards as well as those who lend against them and those who insure them are working together closely. Conveyancers are making sure they know about these new forms of building from the outset so they can make sure buyers understand the implications.