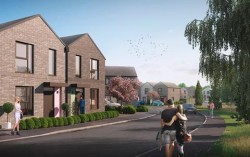 Part Ikea-owned modular housing developer BoKlok has signed a deal with housing association Vivid to build 1,000 homes over the next five years.

The modular housebuilder, which has established a business in the UK in the last two years, said it will work with the Hampshire-based association to deliver up to 300 homes per year to various sites in Hampshire, Surrey Berkshire and West Sussex.

The deal will see the two organisations collaborate on land and planning issues, with BoKlok supplying the homes. The agreement is part of a plan by Vivid to build 17,000 homes in the next ten years.

Swedish firm BoKlok, jointly owned by Ikea and construction giant Skanska, has built more than 12,000 homes in Scandinavia over the last 20 years, and has secured sites for nearly 500 homes since setting up in the UK in 2019.

Earlier this year it announced a deal with modular housing manufacturer TopHat (homes pictured, right) to construct two-and three-storey timber frame houses for the firm. The firm plans to see its first homes in a 200-home site in Bristol next year.

Graeme Culliton, BoKlok UK managing director, said it was working with Vivid to bring more sustainability to the UK housing market. He said: "Working together allows us to accelerate our housing concept and build on the foundations we have already made in the south west region."

Mark Perry, chief executive of Vivid, said: "Vivid and BoKlok have a common vision and are aligned in our forward-thinking approach, to build more homes across a range of tenures, using the latest approach in modular construction. BoKlok is also the right partner for us with our drive to net-zero carbon."