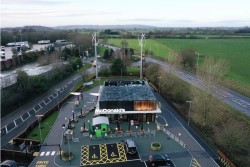 The UK's first net zero McDonald's has just opened in Shropshire, built by a supply chain full of low-carbon innovations.

At first glance, there is nothing special about the new McDonald's restaurant on the outskirts of Market Drayton in Shropshire. It could be any McDonald's in any town.

But this is a rather remarkable building. It is packed with low-carbon products and technologies, intended to reduce the building's carbon footprint to almost zero in both construction and operation.

"We want to create a blueprint for our 1,400 restaurants across the UK and Ireland," says McDonald's development director and CIOB fellow Gareth Hudson. In fact, some of the products sourced and developed for this restaurant have already been used on other refurbishment projects.

McDonald's has set itself a net zero target date of 2040 for the UK business, and 2050 globally, in its Plan for Change sustainability strategy published in 2021. There is a shorter timeline for its restaurants and offices: they must achieve net zero emissions in operation by 2030. "That's only eight years away," points out Hudson.

In deciding what products and systems should go into the net zero blueprint restaurant, Hudson and his team have left no stone unturned. How's this for extreme recycling? All the wall graphics are manufactured from recycled plastic bottles, glued onto the walls with starch produced by the chip manufacturing process. And there's even art made from waste coffee grounds.

The supply chain, a combination of existing members and new ones, has come up trumps, says Hudson. With long McRelationships behind and ahead of them, suppliers have been keen to innovate. Many firms already had ideas waiting in the wings, with this build giving them the opportunity to deploy them.

"We have incredibly strong relationships with our suppliers," says Hudson. "We generally work with smaller companies, family firms.

"We did bring in new suppliers during this process, but a lot of them came through recommendations from our existing supply chain. A lot of small companies are passionate about sustainability."

Some of the product substitutions on the Market Drayton McDonald's are surprising. For example, the black cladding was made from recycled computer keyboards by a company called The Good Plastic Company. Concrete kerbs have been replaced by recycled plastic bottles from Durakerb, which has removed over 1,000 concrete kerbs from the carbon equation. Cladding around the chillers was made from recycled white goods, while internal parapets on the roof contain material recycled from toasters and blenders.

The imprinted drive-through lane contains only 25% of the concrete normally used. It's mostly a formulation of resin and recycled car and van tyres, from KBI UK. The patios are made in this material too.

Inside, all laminates have been banished. "They go straight to landfill," explains Hudson. Instead, there is sustainably sourced screen-printed timber. Finishes such as floor, wall and ceiling tiles are recyclable. "At end of life, the tiles can be ground up and made into new tiles."

Other elements are less unusual. Renewable energy – around 60,000kWh per year – will come from two wind turbines and 92 sq m of solar panels. Mechanical heat recovery recycles heat from the kitchens and harvested rainwater flushes the toilets. All the insulation is British sheep's wool, which otherwise would have been condemned to landfill, Hudson explains, since there isn't enough demand for it at the moment.

Then there's the carbon-intensive materials: concrete and steel.

Usually, McDonald's would use concrete piled foundations. For Market Drayton, the team considered vibro-compacted recycled stone but, on discovering how good the bearing capacity of the ground was, plumped for in-situ concrete pad foundations, which had a large proportion of the cement replaced by pulverised fuel ash (PFA) and ground granulated blast-furnace slag (GGBS).

Lowering the carbon footprint of the modular steel frames for the structure of the building was more challenging. McDonald's worked with supplier Elliott and with a specialist company called Recycled Steel. "We discovered that there is not enough recycled steel in the market to meet demands, so we opted for low-carbon European steel – which is a mix of new and recycled steel.

"We are working with Recycled Steel, who are looking at ways of mitigating carbon by using different types of furnacing techniques to remove carbon from the production process."

The carbon number crunching was still under way as this article went to press. McDonald's elected to use an independent specialist, Method Consulting, to carry out the carbon accounting and has been working with the UK Green Building Council to follow its net zero framework.

"The way that carbon is being measured is changing. Since we started the project, the guidance has changed a couple of times," says Hudson. "That's where our strong partnership with the UK Green Building Council and Method has been really useful."

There may be the need to offset a small amount of carbon, says Hudson: "We will be offsetting an element, but we are hoping it will be minimal." The main culprit is steel, he explains, and while they eliminated as many steel elements as possible, the frame remained.

When it comes to capital cost, Hudson reckons that the build will be around 15% higher than a bog-standard McDonald's. Some items are far more expensive than their carbon-intense counterparts; for instance, the recycled plastic kerbs are three times the price of concrete ones, although there is some payback in that they are quicker to lay.

Getting to this point has required a lot of additional in-house time and resource, says Hudson. Construction manager Evan Westby MCIOB and Paul May, procurement manager, have put in huge amounts of effort, alongside the supply chain, says Hudson.

One thing that this project has underlined for Hudson and his team is the importance of listening to everyone involved: consultants, contractors, suppliers, planners. "Everyone has good ideas," says Hudson. "We have an open-door approach; we listen to everybody."

The other important principle has been to take some risks, says Hudson. "We said: 'Let's rip up the rule book'." Although McDonald's is a global corporation, the UK and Ireland development team has autonomy which allows them to make changes fast, if it benefits the business. For instance, the renewable decor packs created for Market Drayton have already been used for a few retrofits, as have the recycled plastic kerbs and the rainwater harvesting system.

And there is the possibility that the hard work put into sourcing and using the products and technologies here could benefit McDonald's estates beyond the UK and Ireland. In early December, Hudson was due to meet up with his counterparts from around the world to share details of the project with them.

"This isn't the end of the process, it's the start of a really exciting journey," says Hudson. "We will continue to look at different products and different innovations to reduce the carbon we produce on our builds."