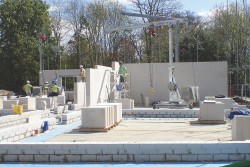 Use of mini-cranes radically reduces manual handling and eliminates repetitive heavy lifting. This results in less fatigue, less risk and less dependency on physical fitness in the workforce. As well and the enhanced health and safety and wellbeing advantages it also fosters diversity, as this way of working is less dependent on physical strength and fitness so is open to workers at any stage of their career in construction.

The introduction of the remote controlled models in 2020 enables MFS’s core teams of two to work more productively. The ‘labour light’ approach also helps to address the UK skills shortage as well as delivering 200% faster than traditional build methods.

MFS have partnered with Lissmac for 16 years, employing their mini-cranes for all its P-DfMA construction projects. Collaborating over the years they have worked together to develop a 110v version of their crane, making it UKcompliant, and have been instrumental in the development of the new generation remote controlled cranes. The mini cranes are the vehicle MFS use to manoeuvre its very large-format blocks safely into position, with minimal physical effort or stress. The large format blocks, positioned with the mini-cranes are all manufactured and cut to size offsite, resulting in no harmful dust onsite and with zero waste to landfill. The benefits of this offsite ‘manufacture led’ technology would not be possible without the mini cranes to assemble these large scale components once on-site.

The blocks weigh up to 400kg and are a minimum of 20N/mm2 strength, >1m wide, >650mm high and typically 214mm thick. Equivalent in volume to approx. 60-80 standard bricks. One gang of two MFS operatives work with one mini-crane, which will allow them to carry out construction in a safe and controlled manner, reducing manual handling and physical strain to almost zero. MFS have tested the productivity levels achieved in terms of volume per day and conclude that they are roughly equivalent to the output of six/ eight traditional bricklayers. Primarily because each block equals about 60-80 bricks and takes only six minutes to lay with thin joint mortar which sets within 2hrs and at temperatures down to -3degrees.

In 2020 MFS introduced the next generation Lissmac LMK 400 TFE/DK Remote Controlled Cranes, which has further increased speed and efficiency and enhanced the team’s health, safety and wellbeing. With one operative in control of the crane, the second worker simply needs to guide the element effortlessly into place. By using the mini-cranes they have minimised the risk of working with large and very heavy elements. The cranes do all the hard work and only release the block once in position and completely secure. Because MFS operate in teams of just two, labour on-site can be reduced by over 80%, meaning that social distancing is much easier to manage. Operating from a single remote-control means you can have two people working as normal, but they can comfortably maintain the advised two metre distance from co-workers.

The first mini-cranes were deployed at a 59 apartment extra care housing scheme in Tonbridge and resulted in 17 weeks being saved in the overall build programme and facilitating early weathertightness and in turn earlier occupancy. The mini-cranes can be used where any large elements require precision placement and can also be used to free up time for tower cranes on larger sites.