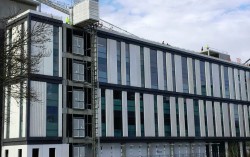 With over 200 exemplary entries packed full of pioneering projects, innovative products and inspirational people - this year’s independent panel of judges had an onerous job selecting the winners.

The prestigious ‘Winner of Winners’ Award, which is given for the highest scoring entry across all categories - was presented to PCE for Project Capella - a biomedical research laboratory for the University of Cambridge. PCE also picked up the award for the Best Use of Concrete Technology for this project. Project Capella is an 18,000m2 biomedical research laboratory for the University of Cambridge (UoC). The main contractor was appointed very early in the project, during RIBA Stage 1 and collaboratively set about undertaking the design stages by forging a ‘one team’ ethos - driving design and procurement innovation throughout the supply chain.

Project Capella is located within the Cambridge Biomedical Campus, where a £600million investment has been made in research buildings, which are being constructed concurrently. Working as one team the entire supply chain used offsite concrete construction solutions to address significant logistical and construction management challenges of the site. Eighty per cent of the frame and façade were built offsite, as high-quality pre-cast modules. This approach ultimately provided UoC with clarity and certainty of costs, quality and overall project delivery. Finite element analysis along with specialist vibration analysis software were utilised to model the structure and the stiffness of the floor plates to develop an appropriate composite slab arrangement. This was coupled with the benefits of constructing the superstructure in its entirety - including the façade, from base.

Through early collaboration between PCE and Kier, the partnership realised the aspiration to prefabricate as much of the superstructure as practically possible. Never had a hybrid of precast and insitu been used in a bio-science environment where vibration control was the primary driver for superstructure selection. Adopting a conventional approach would have resulted in significant pressures on the site and local resources. Through the development of a hybrid solution, PCE was able to de-risk the construction phase of the project whilst providing cost certainty to the client.

The superstructure is recti-linear in form with 6.4m grids longitudinally and non-symmetrical grids ranging between 5.5m and 8.5m laterally. The laboratories are arranged through the centre of the structure with ‘write-up’ spaces adjacent to the façade, with natural light. The aspiration was to create clear, flexible spaces with no down-stands to simplify the complex services integration whilst taking benefit of exposed concrete surfaces wherever possible.

Arranged over six storeys above a basement, the superstructure is principally configured from precast concrete elements, columns, stability cores, shear walls, stairs, landings and the lower portion of the floor plate. Edge beams are made of precast concrete to simplify interfaces with the façade whilst efficiently controlling deflection limits. The spine beams are a shallow composite steel and concrete beam which maintain support to the same depth of the floor slab. The team optimised structural efficiency, internal finish and the simplification of construction. This, coupled with the integration of reconstructed stone façade with integrated glazing, has created the perfect balance of quality, cost and programme. Bio-terrorism security requirements were easily accommodated within a hybrid precast design by mixing solid reinforced core modules with a twin wall system.

Precast concrete technology was utilised throughout the structural frame including, basement liner walls, structural frame components with shear cores and floors. Concrete columns and beams were also utilised for ninety per cent of the façade. The hybrid precast insitu frame includes the stability cores which were delivered significantly quicker and with huge reductions in on site man hours and site deliveries.

The high quality reconstructed stone envelope,  configured as a panelised system, with curtain wall sections, which were preinstalled at the precast works, was constructed with just eight men in four weeks without the need for any external scaffolding.