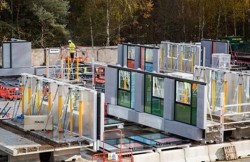 Construction giant Mace is launching a new form of offsite construction, which it claims can speed high-rise build by 25%, the firm announced today.

The contractor was due to hold a public demonstration of the new build method this morning on Get Living's 524-home N06 development on the former Olympic Athletes' Village.

The new system, which it is calling High Rise Solutions, was worked up in partnership with Australian builder Hickory and has been developed from Mace's earlier "jump factory" system.

Mace's "jump factory", piloted on an earlier Get Living scheme, Victory Plaza, aimed to create a factory environment on the top of a tower block, inside which work is carried out before the factory is winched up on a weekly schedule.

Mace said in a statement that its new system integrates the offsite manufacturing approach from the jump factory with digital design techniques. The firm said it will use parametric modelling tools and artificial intelligence, combined with a catalogue of components, to enable it to design and manufacture structure and facade modules offsite.

Mace claims its HRS system has the potential to cut time on site by 25%, vehicle movements by 40% and construction waste by 70%.

Get Living's N06 scheme for rented homes is made up of two towers of 26 and 31 storeys on the East Living development on the former Olympic Park in Stratford, East London.

Mark Reynolds, chief executive of Mace, said the launch of Mace Tech was an important milestone for the construction industry. "Unless we radically rethink how we build," he said, "we will never be able to deliver the housing and infrastructure that is desperately needed across the UK while reducing our carbon footprint."

He added that Mace Tech would allow the firm to harness the latest digital technologies and offsite construction methods, and that he planned to roll out HRS across the Mace business.