Barratt to build one in four homes using MMC by 2025 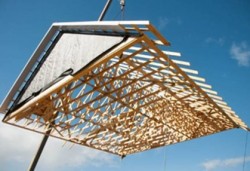 Britain's biggest house builder aims to build a quarter of its homes using modern methods of construction by 2025.

Barratt has rolled out a series of new housing types to allow a switch to greater use of offsite production and standardised product use.

Its commitment to driving down build costs using modern methods of construction came as the volume house builder reported a 12-year high in completions, up 9% to 8,314 in the first six months of the financial year.

During this period nearly 18% of homes were delivered using timber frame or large format block against 15% in the previous period.

David Thomas, chief executive, said Barratt planned to increase volumes by 3-5% a year, against a backdrop of some of its rival house builders reining back completions.

In the last six month of 2019, despite impacts from General Election and Brexit uncertainty, Barratt lifted revenue 6% to £2.27bn, generating a pre-tax profit up nearly 4% to £423m.

Operating margin softened slightly over the period to 19%.

He added that Barratt had become the first major house builder to set a science-based target to reduce carbon emissions in its operations by around a third by 2025.

John Tutte, executive chairman of Redrow, said that the market was fairly consistent across all of Redrow's operating areas with London showing some early signs of improvement.