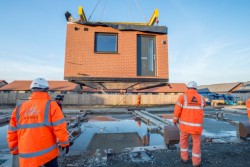 Ilke Homes is to manufacture six affordable modular homes as part of a wider 4,000-home development on the site of the UK's first-ever oil refinery.

Ilke will build the homes for Abode Waterstone and they will be managed by Welsh housing association Coastal Housing Group.

The new scheme, called Abode Coed Darcy, forms part of phase one of a wider development that is transforming the former BP Llandarcy Oil Refinery site near Neath. In addition to 4,000 homes, the development will include onsite primary and secondary schools, a district centre, community facilities and green open spaces.

BP Llandarcy Refinery was formally opened in 1922 by Stanley Baldwin, then-president of the Board of Trade. The refinery was the UK's third biggest by production and by 1960 it was refining eight million tonnes of crude oil a year.

A total of 5,000 tonnes of steel has also been recovered with the majority being reused on site.

The Abode Coed Darcy scheme is using the Welsh government's Innovative Housing Programme (IHP). Announced in 2017, the initiative is available to organisations - such as housing associations, local councils and developers - that use innovative techniques to aid the delivery of new homes.

In February 2020, the Welsh government announced a £45m investment into modular housing, in an attempt to increase the delivery of social and affordable homes.

Dave Sheridan, executive chairman at ilke Homes, said: "To meet government targets, it's imperative that the next generation of housebuilders are trained to manufacture homes in factories. Investment will only flow if the right skills exist. That's why we welcome the Welsh government's commitment to invest in skills development centres, while also building strong supply chains."

Gareth Davies, executive director of growth and new business at Coastal Housing Group said: "Welsh Government and Neath Port Talbot Council have shown massive support for this venture and the Innovative Housing Programme has enabled us to take the first steps towards realising a different, yet positive future for housebuilding in Wales, which we hope will lead to high quality affordable homes and creating new jobs at the same time."