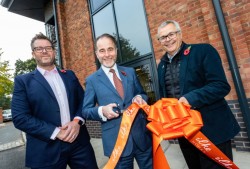 The new facilities will provide a base for ilke Homes’ Midlands team as the company continues with its expansion in the region, where it is already delivering homes for a mix of clients from the public and private sectors.

The announcement follows a string of major ‘turnkey’ development deals that the company has landed in the Midlands in the last year. In July, the housebuilding company was selected by FTSE 100 firm Boots UK to deliver a 622-home community in Beeston, Nottingham. The site is due to become the company’s flagship site.

ilke Homes also recently announced that it had raised £60 million in a recent fundraise. The raise was split between £30 million debt from government agency Homes England and £30 million of equity from new and existing investors - including TDR Capital, The Guinness Partnership and Middleton Enterprises.

Located at B5K Business park, the company’s new offices, which will pave the way for the creation of new jobs for the local community, will provide its regional development team with a central location that is in close proximity to most major sites in the region.

Since launching its developments offering last year, by which ilke Homes secures land, gains planning permission, manufactures the new homes and develops the sites for its clients, the company has developed a pipeline consisting of 3,000 homes - 1,100 of which are located in the Midlands region.

ilke Homes, which now has an order book worth over £200 million, is working with a range of Midlands-based developers, housing associations and councils to ramp up the delivery of high-quality, energy-efficient homes. These include:

Much like how cars are created, ilke Homes precision-engineers homes along production lines at the company’s Yorkshire-based factory. These are then shipped to sites across the UK.

By manufacturing offsite, ilke Homes is able to deliver highly energy-efficient homes, helping investors green their portfolios. In July, the company launched ilke ZERO, the UK’s first mainstream zero-carbon home. ilke Homes is ready to roll out a 1,000 of these a year for a mix of clients following successful trials on sites across the UK - including one in Newark where the company delivered nine zero-carbon homes for SME developer Positive Homes.

“I am delighted to welcome ilke Homes to Tamworth as they continue their expansion into the Midlands. As the local MP I know that this new office, located in the centre of Tamworth, will be essential for the creation of new jobs in the town.

“We are committed to building the homes our country needs and modern methods of construction (MMC) has a vital role in building quality, efficient, beautiful homes.

“With the huge leaps forward in technology, today you can build an MMC kitchen in less time than it takes to watch an episode of Grand Designs.”

“The opening of our new offices in Tamworth is the culmination of a successful year of growth in the Midlands region, where we now have a 1,100-home pipeline. Thanks to our central location, we will be able to continue helping unlock sites across the region for the development of high-quality, energy-efficient housing, while helping pave the way for jobs - meaning we’re making a direct economic contribution to the region.”