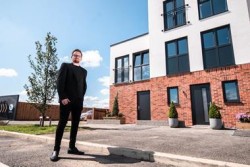 The UK Government’s housing agency has announced a first-of-its-kind partnership with the only housebuilder in Britain to be recognised as carbon neutral on the international stage.

Homes England’s partnership with Etopia Group, a modular housing and technology company backed by the Reuben Brothers, will kick off with the delivery of 30 zero-carbon homes in Wilburton, East Cambridgeshire.

Etopia Group last year became the first housebuilder in the world to achieve both the Carbon Neutral International Standard and to join the United Nations Climate Neutral Now Initiative.

Being announced as world leaders prepare to meet at COP26 to discuss decarbonising global economies, the partnership will deliver some of the world’s most energy-efficient homes. All of the homes will have an Energy Performance Certificate (EPC) rating of 105/100, placing them well-above the highest category of ‘A’. In the UK, only one percent of newbuilds are ‘A’ rated, while the average rating is ‘D’.

The scheme, which was recently granted planning approval and is backed by a £3.6 million loan facility from Homes England, demonstrates that ministers remain prepared to take genuinely innovative steps to intervene in the housing and climate crises by creating meaningful supply-side incentives, and backing companies who can deliver homes that meet and exceed current soon-to-be-introduced building regulations.

“If we’re to simultaneously meet climate and house building targets, then genuinely innovative steps that create supply-side incentives to increase the number of energy-efficient homes being delivered will be vital. Our role, as the Government’s housing accelerator, is to be bold and take steps that unlock crucial capacity - and offsite manufacturing, with its sustainability and efficiency credentials, is a perfect solution.”

Etopia Group, who precision-engineers homes along production lines in a factory, is able to deliver to a zero-carbon specification thanks to integrated low-carbon technologies, such as air source heat pumps, sustainable building methods, highly energy-efficient building fabrics and smart devices that collect real time data on a home’s energy performance.

Through new building regulations and plans to scale up the installation of low-carbon heating systems in UK homes, ministers are doubling down on efforts to decarbonise the UK’s housing stock. A report from the Committee on Climate Change estimates that energy use in homes, such as heating and electricity, accounts for 14 percent of total UK emissions.

Under new rules, new-build homes constructed from 2022 are required to reduce emissions by 31 percent in preparation for the 2025 Future Homes Standard which, as set out by the Ministry for Housing, will require fossil fuel heating systems, such as gas boilers, to be replaced by low-carbon heating solutions such as air source heat pumps and solar panels.

This poses a problem as homes being built between today and 2025 will require retrofitting to meet soon-to-be-introduced standards. The CCC puts the typical cost of retrofitting a home in the UK at c.£30,000. Based on the Government’s 300,000-new-homes-a-year target, this means that the cost for retrofitting homes built between now and 2025 could exceed £36 billion.

These problems are compounded by the fact that the UK’s house building industry is lacking the capacity and resources to innovate and improve productivity to reach the UK’s 300,000-new-homes-a-year target. In 2019-20, only 220,600 homes were delivered in the UK, according to official figures.

Etopia Group is offering ministers a solution to this by delivering up 2,000 zero-carbon homes a year for a mix of tenures. Thanks to precision-engineering techniques, the company can also deliver homes twice as fast as traditional methods.

“Our partnership with Homes England is a great example of how the private and public sector can work together to deliver highly energy-efficient housing across the UK.

“As world leaders prepare to meet from next week, tackling the emissions produced from construction and housing remains a sticking point. In the UK alone, 40 percent of our emissions can be linked back to households. In order to meet our legally-binding net-zero targets, solutions to cleaning up housing’s act will be vital. This partnership is offer an innovative solution to this problem.”