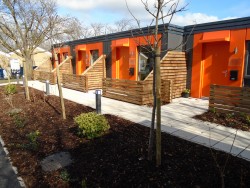 Housebuilder Hill Group is to set up its own bespoke modular housing factory after buying a 50% stake in an off site producer, Volumetric Modular, last year.

Founder Andy Hill told Housing Today that the firm had bought the stake in the modular manufacturer in order to fulfil his 2019 "Foundation 200" pledge to spend £12m donating homes to charities and local authorities to house homeless people.

Hill said that demand for the product had been so strong from local authorities that he was looking to invest in a bespoke facility in order to develop the product into an ongoing part of the business.

As well as suppling prefabricated units for councils to house homeless people, Hill said the business was also currently prototyping bathroom and services pods to be installed in Hill Group's homes for private sale.

Hill said: "Because of covid it seems our Foundation 200 product has been extremely popular, and we've had a lot of local authority and registered provider clients wanting us to deliver them as a paid product, or just buy them.

"That's the vision for the business, to become part of the group which adds value and stands on its two feet."

Hill, which builds around 2,000 homes a year, has a plan to double turnover to around £1.2bn by 2025, with Andy Hill saying the business will also open a South west region based from Bristol "when the time is right". Hill told Housing Today that all of the planned growth will be funded from the group's balance sheet, meaning it was not intending to bring in external investors who would dilute the family ownership.

The news came as Hill Group revealed it has been chosen by west London housing association RHP Group to redevelop the 192-home Ham Close estate.

RHP has plans to demolish the existing 1960s blocks of flats in the Ham area of south west London, and replace them with high quality new homes for all existing residents, plus a range of additional homes of a variety of tenures.

Hill said it had been selected to the project after a lengthy two-stage tender process, and will now work with RHP to develop detailed plans for the site prior to submission of a planning application.

Hill said it wanted work on site to start by 2022, should it receive permission. The estate includes 143 affordable homes, with RHP looking to increase the total number of affordable homes with the new schemes.

However, the exact number of homes in the new scheme will be determined following community consultation beginning this summer.

Tim Willocks, RHP's executive director of development, said the organisation was attracted to working with Hill due to its experience in successfully delivering complex regeneration projects and the quality of their homes. He said: "Their submission to us showed real knowledge and respect for the architectural character of the area and their landscaping ideas reflect the green surroundings of Ham. We are looking forward to working with Hill to engage with the local community to seek their input into the detailed proposals for Ham Close."

RHP owns or manages around 10,000 homes in west London covering Richmond, Hounslow, Kingston, Ealing and Hillingdon, and has a plan to build 700 further homes by 2023.

Hill's selection comes after it has this year already won the 1,750-home job to redevelop the Teviot Estate for Poplar Harca, as well as in April winning the 750-home Douglas Bader Park redevelopment for Home Group.