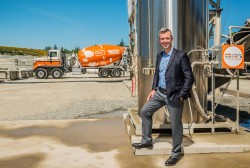 Halifax's CarbonCure Technologies, which provides a suite of carbon dioxide removal products to the concrete industry, announced on Friday that it has sold its 500th system.

The transaction was part of a three-plant rollout of CarbonCure ready mix by the family-owned Don Chapin Co. in Salinas, Calif. The event was reached the same week CarbonCure celebrated the production of two-million truckloads of low-carbon concrete using its technology.

Nearly one million of those were delivered in 2021, according to CarbonCure, which tracks data in real time.

"These major milestones, and their increasing frequency, are clear indicators that CarbonCure is scaling rapidly and making tremendous progress toward our ultimate goal to reduce and remove 500 million (tonnes) of carbon emissions annually by 2030," CarbonCure chair and CEO Rob Niven said in a news release.

Founded in Nova Scotia in 2012, CarbonCure's long-term vision is to support the complete decarbonization of the concrete manufacturing process through innovation and rapid scaling of its suite of carbon mineralization solutions, the company stated in the release.

"We're grateful to have such innovative partners. And I am very excited for what's ahead in 2022."

In April, CarbonCure was named a winner of the NRG COSIA Carbon XPRIZE.

The company says it is entering a period of growth following the launch of new technologies, including CarbonCure precast and CarbonCure reclaimed weater.

Its carbon removal technologies, CarbonCure said, have been used in more than 11.9 million cubic metres of concrete to date, equivalent to building the Hoover Dam 4.5 times or the Pentagon 35 times.

As a result, CarbonCure says its technology has saved more than 132,000 tonnes of carbon dioxide to date, equal to the annual CO2 emissions from 28,750 cars or equivalent to every ticket holder at a New York Giants home game leaving a car parked at MetLife Stadium for a full year.