A new range of floating modular homes has been designed by the architect behind the Stirling Prize-nominated revamp of London Bridge railway station.

Grimshaw teamed up with Dutch manufacturing group Concrete Valley to produce designs for the Modular Water Dwelling, described by the pair as a potential solution to the shortage of affordable housing in urban areas, "free of the constraints of land-based construction and resilient to the mounting threat of flooding from rising sea-levels".

Concrete Valley, based in Bergen op Zoom in the Netherlands, and Grimshaw said the proposed homes could be factory-made and feature standardised components, but would also allow for internal layouts to be determined by occupants' own requirements. 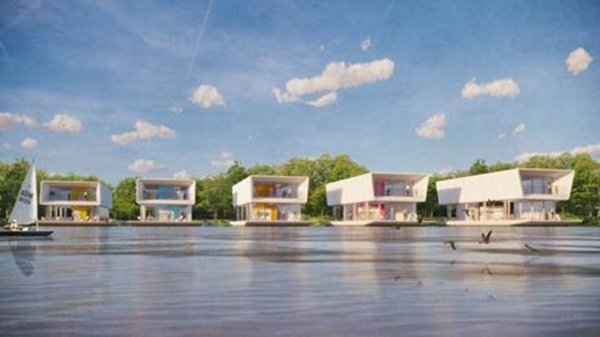 The homes could be located and spaced according to the layout of a site, light sources and views.

The water homes would use minimal energy, with well-insulated and shaded lower pontoons and upper stories, and energy provided by solar roof panels and heat exchangers built into base boxes below the waterline.

The two firms said they were committed to producing prototypes "to test and refine the concept".

Jorrin ten Have, associate principal at Grimshaw, said: "In facing the realities of global transformations, be they climate change, increased urbanisation or reduced resources, it is critical that architects and designers respond to these concerns in a variety of ways.