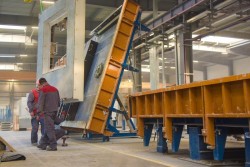 Government needs to deliver on previously made commitments around off-site manufacturing, including for repeatable social infrastructure to be delivered using a platform/off-site approach, according to the Association for Consultancy and Engineering (ACE).

The organisation which represents the companies large and small that design, deliver and manage our national infrastructure and built environment, has shared the next instalment in its Project Speed briefing series exploring how to deliver, "better, greener and faster".

It argues that the benefits of off-site will only be realised through greater scale and that Government procurement should be leveraged to drive wider adoption. While its previously made pledge resulted in the Department for Education procuring 22 major off-site contracts, other public bodies are lagging with the remaining departments procuring only one between them.

Commenting on the release of Project Speed & off-site manufacturing, Guto Davies, Head of Policy at ACE said: "Government commitments on off-site need to be realised if we are to see off-site fulfilling its undoubted potential for better, greener and faster delivery in the built environment.

"Ambitions around levelling-up, Net Zero and in the more immediate-term around post-pandemic recovery, could all be boosted thanks to a wider adoption of offsite which not only has the potential to unlock social value, but offers the possibility for swift delivery."

Other recommendations include, ensuring wider compliance with the Construction Playbook and Value Toolkit, providing more detail on off-site projects within the National Infrastructure and Construction Pipeline, as well as funding training and qualifications for off-site construction skills.

It also argues the industry needs to play its part by advocating the benefits of off-site to all stakeholders, embracing more collaborative delivery models to realise off-site opportunities, and adopt a more standardised approach to pre-manufactured components.

"Of course, industry has an important role to play too, primarily as a champion for off-site and the opportunities it unlocks, to help overcome long-standing and out-dated misconceptions around the approach."