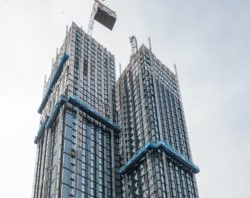 Tide Construction has craned the final pod into place on the world's tallest modular building in Croydon.

The last of 1,526 modules have been assembled on site in south London to create two towers measuring 44-storeys and 38-storeys.

The 136m scheme is as high as the London Eye and will house 546 Build to Rent homes.

Tide and its offsite manufacturing division Vision Modular Systems will complete the project in just over two years – half the time it would have taken using traditional methods of construction.

Christy Hayes, CEO of Tide Construction, said: "Construction of the towers began in February 2018 after planning consent was gained back in November 2017.

"From there, the 1,526 modules were stacked on top of a concrete podium linking both towers at ground floor level.

"Once the concrete cores of the two towers were complete, Vision Modular Systems' pre-fitted, pre-plumbed and pre-wired modules began arriving on site.

"We successfully installed the last module in just 35 weeks – three weeks ahead of an already tight schedule – after the first was craned into place.

"As we reach this exciting milestone, already 80% of the glazed terracotta façade has also been completed."