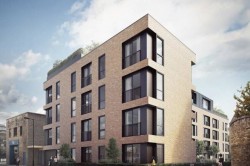 The phrase "modular housing" has recently been cropping up more frequently among those of us who hang out in housing circles. (You should come to our parties, they’re wild.) Two London developments – one private, one public – opened up to prying eyes recently, so it’s an opportune moment to take a closer look.

But first of all: what is modular housing?

Briefly, it’s housing that’s mainly constructed off-site, on a factory production line. Private developer Pocket Living makes its one- and two-bedroom flats – including fittings – in two weeks. The modules are then lowered into place to form buildings over around 30 days; then finishing work takes place, to make the resulting block look like a traditional apartment block.

Modular housing is quicker and cheaper to put together than standard construction methods. Pocket Living estimates its developments take about six months less to complete than old fashioned building methods. And doing so much work off-site significantly reduces dust levels and disruption for neighbours caused by noise and lorries. It’s also one way around the construction industry’s current skills shortage.

Pocket Living recently let press and representatives from local councils into a new development near the Imperial War Museum in Lambeth. The quality is pretty impressive: it definitely doesn’t feel like stepping into a prefab.

The one bedroom flat on show was, shall we say, snug – but 38m2 is in line with space standards for single occupancy dwellings set out in the London Plan. (This is just as well; this may say more about me than the property, but I can’t imagine a relationship holding up without more space.) Prices for these flats start at £267,000; for this development, that's 30-35 per cent below market value.

This prompts a number of thoughts. You don’t get much for your money these days; but it is at least near a zone 1 tube station (to be specific, Lambeth North); and modular housing must be a damn sight cheaper to build if it can be sold at these prices.

On the latter point, Pocket doesn’t have figures on costs compared to a traditional build, but says all its homes go on sale at least 20 per cent below the market rate. Speed undoubtedly helps to keep costs down, too. The development in Lambeth will take 12 months from land completion date to allocating homes to new residents.

A little further south, Lewisham Council is finishing off PLACE/Ladywell, a Rogers Stirk Harbour + Partners-designed modular block of 24 homes, providing temporary accommodation for families on the council’s waiting list. The homes are situated on the grounds of a former leisure centre; the land would otherwise be in limbo, waiting for planning permission for a larger, permanent development.

The council says it will save £140,000 a year simply through not paying to house these families in low quality B&B accommodation. With income from rent and commercial units, it believes the project will pay for itself in ten years. The modules have a lifespan of 60 years and can be moved five times to other sites in that time period.

The space in these flats is actually 10 per cent larger than London Plan mandated standards and all have balconies. PLACE/Ladywell won two prizes at the recent New London Awards, including the prestigious Mayor’s Prize. It was also constructed even faster than Pocket Living’s Lambeth development: work began off-site in November 2015, and residents are on the verge of moving in.

Is modular housing the solution to the housing crisis? No, and nobody involved pretends that it is. But this lower cost, simple and fast construction model has great potential for adding to the mix when it comes to providing more affordable homes.

Even Pocket, a private company, has a model that’s committed to affordable housing. Costs are kept down by using the same modular home design, offering no car parking space and buying land using a GLA-supported loan.

To buy a Pocket home you must be a first time buyer living or working in the relevant borough, earning under £90,000 (the average Pocket buyer earns closer to £40,000) and not buying with cash. Pocket commits to selling its homes for at least 20 per cent below the open market rate.

Crucially, there are covenants on Pocket homes which control future affordability. Owners aren't allowed to rent them out and, when they come to sell on, new buyers are also subject to income and residence eligibility criteria. Pocket says this acts as a brake on the value of the homes, keeping them at around 20 per cent under the general market price. In other words, they're discounted (we can all argue about the definition of "affordable") forever.

"Modular housing has huge potential to speed up the delivery of new homes in London," says Tom Copley, a Labour member of the London Assembly. "If we are going to reach 50,000 new homes a year, developers, Housing Associations and local authorities should all be looking to deliver housing in this way."

Copley’s Assembly colleague, the Green party’s Sian Berry, has an idea about how councils could use the concept to minimise disruption when redeveloping estates. "As part of an alternative to demolition, modular homes should be of great interest to residents and councils alike when looking at ways to plan for more homes on existing council estates, without displacement and years of building works."

Modular housing certainly has potential to keep residents in their communities while blocks are being improved or rebuilt; it should certainly be looked at as a way to quickly infill unused space with permanent homes. Lewisham’s creative idea to unlock land for housing while it’s stuck in planning hell is also something that can be implemented elsewhere.

It’s not, in itself, a solution to the housing crisis. But it could be a solution.