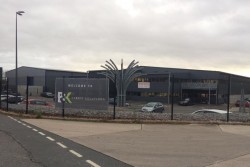 A multi-million-pound family-run Derby business has failed after turnover fell by more than £14 million over 18 months.

Robinson Structures Limited, run by the Robinson family, ran out of cash and financial options last week and called in the administrators who have sold the business.

The company, in Alfreton Road, designs and builds steel-frame structures and has been purchased by a local rival. It is understood that all 68 employees of Robinson Structures have been retained as part of the deal.

Robinsons branding has disappeared from the site, accessed via Haslams Lane, with signage now stating 'Welcome to B&K Hybrid Solutions' at the distinctive Eagle Park premises.

A spokesperson for Robinson Structures said: “It’s a sad day for the Robinson family, but we are thankful that jobs have been saved and the state-of-the-art production facility remains both intact and operational.”

The Robinson family have been producing steel structures for generations in Derby.

It has recently been announced that the new owner for the majority of the assets of the business had been found and that the deal saved the jobs of the 68-strong Robinsons workforce.