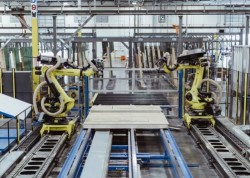 America's high-tech offsite construction pioneer Katerra is closing its original building-components factory in Phoenix, Arizona at the end of this year, with a loss of 200 jobs.

The SoftBank-backed start-up said the 250,000-sq-ft facility, which opened in 2017, represented its "first-generation approach" to offsite manufacturing, and that bigger and more automated factories in California and Texas would supply timber and steel components for its building projects.

Construction of the California factory, in Tracy, is nearly complete, the company said, while construction of the factory in San Marcos, Texas is slated to begin in early 2020, with production starting in 2021.

The closure announcement follows a report last week that one of the founders of the company, Fritz Wolff, had left the board.

In October, technology news website The Information cited former employees and customers claiming that Katerra had withdrawn from at least six apartment and hotel projects in the US over higher-than-expected costs, and that more than a hundred employees have been laid off.

In response to The Information's report, a Katerra spokesperson told the website: "It is common for construction deals to pause or stop for a myriad of different reasons. The changes we have made are a sign of a healthy, but evolving and fast-growing firm."

Since its founding in 2015, Katerra has expanded rapidly with more than $1bn invested by the SoftBank Vision Fund, prompting media to compare the company, which is yet to turn a profit, with other troubled companies such as WeWork that have grown quickly with SoftBank's backing.

Katerra rejects the comparison. "We've had some learnings," Matt Ryan, Katerra's head of manufacturing told Bloomberg. "We've worked with lead engineering and architects to address those."

"It is a step-change from our Phoenix factory, accelerating Katerra's production of high-quality building components manufactured to precision," said Ryan.

Equipped with the same technologies, the 600,000-sq-ft San Marcos factory is scheduled to reach full production in 2021.

In September this year Katerra opened a 270,000-sq-ft mass-timber component factory in Spokane, Washington, and has two factories in India, and plans to establish mobile factories in Saudi Arabia.

"When we decided to add manufacturing, our objective was not to create another silo in the AEC industry. Rather, we aimed to develop world-class manufacturing capabilities that allow us to rethink and re-engineer the way building systems are assembled," said Nic Brathwaite, the company's chief technology officer, yesterday.