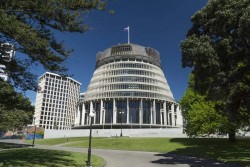 Megan Woods, New Zealand minister of energy and resources, said: "Under this government we're building the most homes since the 1970s, with a record $8.2bn of residential construction in the past year, but we need to do even more to tackle the housing shortage.

"Offsite manufacturing has the potential to transform the building sector, and drive innovative ways to build homes at lower cost, and in faster timeframes. It can significantly change the way we build homes because builders won't have to contend with external elements like the weather.
"It could play an important role in smoothing out the 'boom-bust' cycle that has plagued the sector in the past, and help prevent another housing shortage emerging in the future."

An offsite factory in Petone, near Wellington in the south of New Zealand's North Island, is already building units to be shipped to Maraenui, a suburb of Napier.

Government figures suggest New Zealand is heading toward a peak in total annual construction value of US$26bn in 2023, and that demand for construction-related workers will grow by 56,000 between 2016 and 2022

Earlier this year, New Zealand opened a new School of Built Environment to cater for a building boom, and announced a US$4bn infrastructure plan and commission.