Digital twins: Taking modular construction to the next level 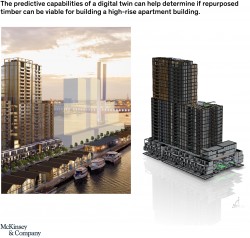 In the past 20 years, the construction industry has fallen behind in digitalization, especially in the use of data and analytics or artificial intelligence. During Bill's time as chief digital officer of GE and Daryl's 25 years of industrial design, construction, and digital production at Lendlease, these technologies went mainstream in automotive, OEM, utilities (such as water and wastewater networks), and other industries.
Historically, construction has been a highly linear, labor-, and time-intensive process. Everything from design briefs to detailed architectural line drawings, modeling, testing, and iterative changes must be considered before a project can take shape in the physical world. And each step of the process must be communicated between the architect, engineer, and construction chains.
A "digital twin"—or digital replica of a physical entity—can aid construction projects by accelerating and automating traditional design, production, and operational processes. As such, it can serve as the backbone for prefabrication and as a more significant means for achieving industrialized efficiency.
What is a 'digital twin' and how does it complement modular construction?
Unlike traditional construction models, the digital twin replicates every detail of the original object, whether it's a high-rise or jet engine. This means the digital twin can account for the behaviors and processes involved in construction all the way down to the individual materials and components.
Take, for example, the design and construction of an offshore wind turbine. At nearly 1,000 feet tall, and with each blade measuring nearly 250 feet in length, building these turbines at sea is inherently rife with challenges. To start, a ship carrying supplies must be converted into an at-sea platform; then columns are dropped through the deck, raising the ship above water. From there, a crane is assembled on site that helps move the pieces into place.
Real-time data collected by sensors can create predictive simulations to better understand how the turbine will perform in the moment and into the future, accounting for factors such as inclement weather conditions. The sensors can also provide the capacity to input and analyze operational, environmental, and financial data to provide a comprehensive integrated solution. Real-time data can also be used to conduct a social analysis to determine how people might interact with the turbine.
These kinds of options have huge implications for prefabrication. While an alternative to on-site construction, prefabrication must still rely on some of the same circumstances: a productive factory environment to be cost effective, an automated manufacturing process (to some extent), and economies of scale based on the finely tuned repetition of uniform components. But technology can help do away with economies of scale and deliver greater supply-chain efficiency to make modular construction more feasible and profitable.
Until digital twins are successfully implemented, two additional challenges facing prefabrication will impede both investment and design. First, small projects and little to no visibility into product-to-market timing can make justifying investment hard. And second, good building design still requires understanding context and addressing issues such as environmental performance, geography, local planning, and building regulations—and these are not guaranteed.
One clear advantage of the digital twin is its capacity to align sustainability with design goals. In other words, making a digital twin can disclose its carbon footprint and energy efficiency up front. In addition, the technology means that the various pieces of a structure can be produced in an off-site factory and then assembled on site—thus buildings can be not only easily assembled but also disassembled and reused to support a circular economy.
Applying digital twins to modular construction

Lendlease recently built a digital twin to test and determine the viability of building a multistory complex on Collins Wharf, located on the Yarra River in Melbourne from sustainable timber (exhibit). While this timber had been used previously, it had not been tested in buildings of this height—namely, a 28- and a 29-story apartment tower.

The inclusion of the project's processes and materials in the digital twin identified options and produced a more granular understanding of process and cost for developers. Although it's still early in the design process, the digital twin for the towers has already provided insight on how to actively tighten the project timeline and reduce costs.

The Tallwood House provided a model to plan out the prefabrication and construction of the building that included a simulation of on-site assembly of the manufactured parts. As a result, the 20-month project was completed in under 17 months and delivered in half the time of an equivalent building using traditional methods.

Digital manufacturing is already playing a major role in ending construction's reliance on economies of scale. Robotics, 3-D printing, and digitally controlled production methods are now prevalent in fabrication. These new technologies enable each component of a project to be produced locally in small volumes, cleanly and efficiently. The scope or scale of a project, basically, is no longer its defining characteristic.

Create high-fidelity prototypes. Computational or generative design can be employed instead of traditional line drawings, allowing projects to free up time and costs by circumventing historically intensive design efforts.

Replicate, simulate, and evaluate. This procedure applies to both the processes for manufacturing and assembly and also the physical characteristics of the materials used. As a result, the physical performance of a component can be understood before anything is built. The digital twin can demonstrate how various manufacturing tolerances and factors can complicate the production of complex objects—for example, how buildings' components might expand, deform, or react in the real world.

Make data accessible to all players. Volumes of easily accessible data beyond the core design can be digitally stored and shared among all stakeholders and at all stages. Therefore, designers—who have traditionally been isolated from the construction and downstream manufacturing processes—are provided a collaborative approach and understanding of the project, with technical parameters firmly embedded into the design algorithm.

Capture data from the physical product. Once the project is completed and open for business, sensors can collect data to inform future designers on how the object performs. For instance, if buildings are composites of digitally fabricated components, then iterative improvements on the design of each component can be driven from this virtuous cycle. Until now, this concept has largely been absent from the architecture, engineering, and construction industry.

Ultimately, digital twins could help democratize design in construction. Although the technology is still in its early days—for both the industry and the design community—it could soon unlock the capacity to explore countless ideas using technology already at our fingertips. By prioritizing those ideas, mitigating risk, and providing efficiencies, the industry can adopt modular construction in ways previously not possible.