Beyon3D Raises $12.4M and Readies Launch of Robotics for Manufacturing and Construction 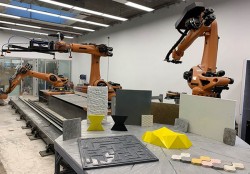 This week, Beon3D Ltd. announced “aggressive plans to roll out its groundbreaking manufacturing technology” across Europe, the U.S., and Canada. The Tel Aviv, Israel-based company plans to leverage its recent joint venture with Ciment, a subsidiary of Israel Shipyards Industries and a leading Israeli manufacturer and supplier of cement products.

“The company is primed to take an important step towards realizing its vision of revolutionizing the construction sector and the way we build,” said Ran Berman, CEO of Beyon3D. “In the coming years, the company’s groundbreaking manufacturing system will spearhead the transformation of traditional manufacturing processes.”

Founded in 2011, Beyon3D has developed a digital manufacturing system encompassing design to fabrication of concrete building products. The system includes custom software and hardware tools combined with tailor-made materials. Beyon3D added that it holds patents and trademarks for all of its technologies.

Beyon3D claimed that it is filling a gap in the prefab construction industry. The company said it offers a scalable solution with high-quality products, reduced manufacturing times and costs, and reduced industrial footprint and dependence on manual labor.

Its stated goal is to create “a more efficient and effective technological solution for an industry where automation is key to growth.”

Israeli high-tech raises $1.8B so far this year

In June, Beyon3D celebrated its initial public offering (IPO) on the Tel Aviv Stock Exchange (TASE). The company raised NIS 41 million (about $12.4 million U.S.) in a book-building IPO of units comprising shares and two series of warrants to institutional investors and in a Dutch auction to the public, based on a company valuation of NIS 216 million (about $65.4 million).

The company has joined TASE’s TA-Growth, TA Tech-Elite, TA-Global BlueTech, TA-Technology, and TA-Industrials indices. Beyon3D is one of 51 new companies listed on the TASE since the beginning of 2021, of which 33 are companies from different fields of the high-tech sector. They have raised approximately NIS 5.9 billion ($1.8 billion U.S.) in aggregate.

Israeli high-tech companies are driving the next generation of innovation and growth in emerging markets, according to a recent report by U.S. management consulting firm Boston Consulting Group (BCG). The report also noted Israel’s long record of success in attracting top scientists and in encouraging close collaboration between government and industry to foster technology development.

“Beyon3D has been able to develop a significant stakehold within the Israeli technology sector and sees immense opportunity to innovate further in North America,” said Berman.