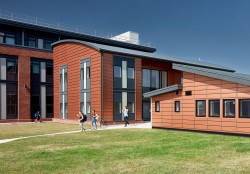 This week on the Offsite Hub Blog the Wernick Group discuss how modular construction delivered for Swansea University.

Swansea University’s Bay Campus was at risk of becoming a victim of its own success. The five-year estates strategy that had served the campus so well was becoming outpaced by the demand for teaching space at the campus.

However, the University was determined not to compromise the student experience on campus, and a significant part of this experience was the campus environment itself. Having been lauded for the ‘consistent rationale’ underpinning the design of the campus and buildings, the University were keen not to undermine this effect with an inappropriate temporary facility, no matter how urgent their requirement.

At Wernick® Buildings, we had recently overcome a challenge of our own. As modular construction gained traction in the UK, we were seeing demand for our services increase. Not only in the quantity of projects, but also the size and complexity of them. More and more clients wanted to access the benefits of offsite construction for a wider variety of applications.

As the demands placed upon us changed, we realised we had an opportunity to innovate our approach to manufacturing our buildings. While our existing systems were flexible enough to adapt to nearly any requirement, the solution would not be optimal. Instead, we wanted to develop something entirely new.

The result of this endeavour was the Swiftplan® system. Much simpler to manufacture and install and with performance improving features, like a fully non-combustible wall construction, and a CLT flooring system that provides performance comparable to concrete. It also provides much greater architectural flexibility, offering some of the tallest ceiling heights on the market at 3.6m to underside of ceiling soffit, able to accept any proprietary cladding system and incorporate large format glazing. When Swansea approached us to deliver a temporary lecture space, both in time for the new school year and in a way that wouldn’t look out of place on campus, we knew that Swiftplan® would be the answer.

Our confidence in the Swiftplan® system concept was evident in the first project it was used on; the Wernick® Group’s own head office in Wickford. This building featured a large glazed atrium, timber brise soleil, and exposed internal CLT features in reference to our new flooring system. The lecture theatre at Swansea would not look like our building at Wickford, but it did demonstrate the architectural flexibility that the system could accommodate without compromising the high performance of the underlying system.

The University engaged with us early at RIBA stage 1, prior to undertaking any design work, which was vital in the timely delivery of the project. One of the quirks of the modular construction process is that design needs to be done in conjunction with the provider to ensure manufacturing optimisation; it’s surprising how much time can be saved by doing simple things like changing the orientation of a row of toilet cubicles to miss a module joint and thus allowing them to be installed within the factory rather than on site. Any work done before engaging with a manufacturer risks becoming redundant, which can have a serious impact on the programme and duplicates design costs. The 2,600m² building was designed in conjunction with University appointed architects Powell Dobson, who had already worked on the Data Science Building on the Singleton campus.

Manufacture of the building actually started before breaking ground on site, this ensured that as soon as the foundations were ready installation could begin. Manufacturing in a factory environment also made the programme more resistant to weather delays, as well as being more efficient than building on site. In fact, manufacture of the 60 modules took just six weeks.

Despite the ‘consistent rationale’ of the campus building design, Powell Dobson still had a large degree of freedom in choosing materials for the external finish of the building. Features of the existing campus structures include traditional brick finishes, rainscreen cladding and large format glazing. Wernick® were able to match this design flexibility in the implementation of the project, with the Swiftplan® system able to accept any of these features. Even less common features like living walls already had precedent on the campus, both from the IMPACT building at the entrance to the campus, and the Active Office, the first project which Wernick® delivered on the campus.

This design flexibility manifested itself in the finish of the new building, dubbed ‘Y Twyni’ by the Student’s Union in reference to the surrounding landscape. A brick skirt nods to the finish of the surrounding buildings, while cladding panels use colour to tie Y Twyni into the rest of the campus, with some using perforations to provide both. Large glazing features at the end of the H shape and around the main entrances provide light to circulation areas.

Internally, the building consists of two large areas on the ground floor; one lecture theatre and a new spacious office for the Student’s Union, each 478m² in size. Upstairs consists of a mix of seminar, IT and study spaces. Delivery of the overall site programme took just under seven months, well in time for the start of the new academic year.
If you’re an architect looking to learn more about modular construction, or want to know how modular could benefit your business, visit www.wernick.co.uk/buildings or call 0800 112 4640