A Potential Barrier in the Road to Reaching Net Zero Target 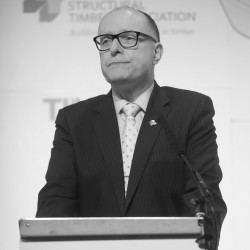 The Government’s recent consultation on extending the ban on combustible materials to more building types and lowering the height restriction in England from 18m to 11m closed on 25 May. As we await the decision, Andrew Carpenter, Chief Executive of the Structural Timber Association, shares his concerns with the Offsite Hub Blog about the impact, if adopted, this ruling could have on our ability to decarbonise the UK construction industry.

Roger Harrabin recently reported on BBC News that the Government is planning to reduce the maximum height of timber framed buildings from six storeys to four to reduce fire risk. Harrabin rightly pointed out that this action would contradict other advice to increase timber construction because trees lock up climate-heating carbon emissions.
It is clear that the UK is out of step with the approach being taken by leading economies in Europe as evidenced by the actions of President Macron; he has ruled that all new publicly funded buildings in France should be delivered from at least 50% timber or other natural materials by 2022. A study from the Germany’s Potsdam Institute (PIK), found that a global boom in wood buildings could lock in up to 700 million tons of carbon a year.

The STA and other timber trade bodies say the Government in England has misunderstood the science behind timber construction. A blanket ban that is not based on building physics, test evidence or scientific facts is seen as a quick fix and as a result, the UK could experience far reaching implications for decades to come.

Climate change if not dramatically addressed will be the biggest crisis of our time. This is acknowledged by the Government in setting the net zero carbon target to be met by 2050. With as much as 7% of all global CO2 emissions coming from other less sustainable construction technologies, it is difficult to see how these targets will ever be met if these restrictions come into force.

The blanket banning of products does not address the Hackitt Review findings for more accountability and responsibility of how buildings are constructed. Nor does banning products improve build quality or clarify roles and responsibilities in the decision-making process. I could go on, but the point is made. Height restrictions are not a measurement of safety. Poor design results in inferior and not necessarily safe buildings – regardless of the technology from which they are constructed.

The lack of clarity as to what the ban applies to is creating confusion and the STA and our members firmly believe that any extension to the current 18m restriction should focus on the external cladding and not the structural wall itself. We will only support this height restriction on the proviso that Building Regulations replicate the Scottish model where 18m is still acceptable when supported by evidence of non-combustible cladding and well-designed fire management systems. These views together with robust test evidence has been reflected in the STA’s response to the Ministry of Housing, Communities & Local Government (MHCLG) consultation.